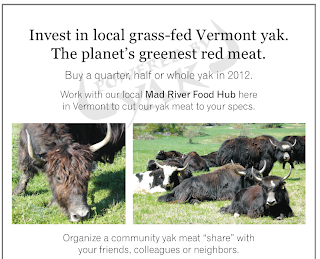 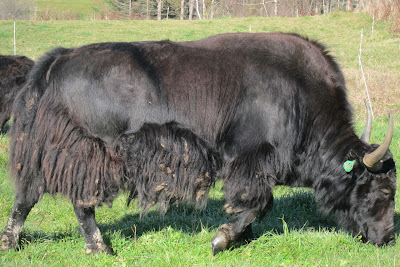 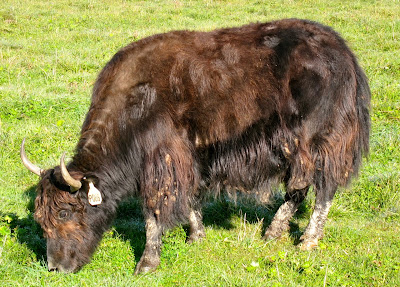 Vermont Yak Company is excited about the new Mad River Food Hub, which will allow us to process, store and deploy our yak meat more inexpensively and efficiently. Thanks to Vermont governor Peter Shumlin for visiting with us today, shown here with Dave and Susan. 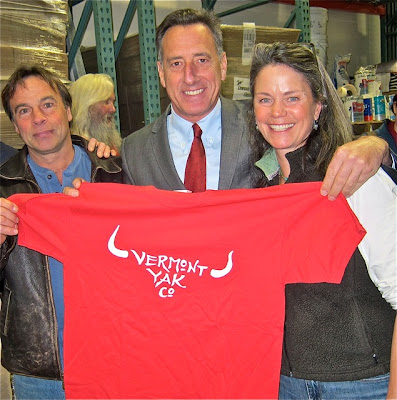 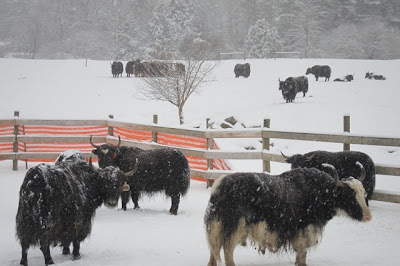 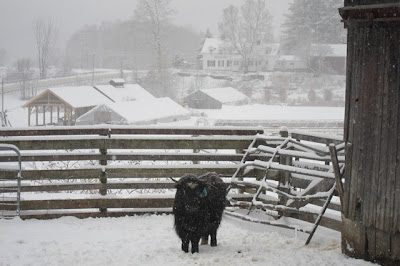 Posted by Phineas Gage at 11:17 AM No comments:

Faithful readers of our blog may recall one of our yaks, named Zak, heading north to Vermont's Hero Islands a few years back to live on a farm up there. We just got a nice holiday card from Zak and owner Joan: 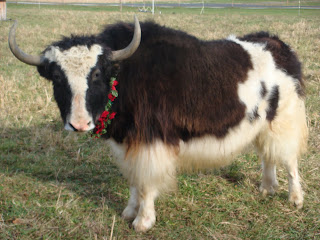 Joan writes: Thought you might like to see a current picture of “Zak the Yak”. Our vet estimates his weight to be about 750 lbs. – not bad for the little guy we picked up a couple of years ago! He still has his wonderful sense of humor, which includes bugging the crap out of Mac the llama and being regularly spit at by Mac. Zak is now above all the goats in the pecking order, which he seems to enjoy, and he is also their guardian. Whether he is protecting the goats or his territory I’m not sure but it works out well for the goats either way. His favorite treat is goat grain, which he gladly comes running for, with his white poof of a tail tossed up over his back, grunting occasionally along the way. He likes to be petted and hanging out with us, and I am able to put a halter on him while he is out in the pasture, which always amazes me. We trim his hooves in the spring and fall, and he tolerates that quite well. I haven’t gotten any usable fiber from him yet but he has more than enough “wool” to keep himself cozy even in the coldest of weather, but he always seems to take refuge in the barn! Hope all is well with everyone and all your critters. Happy Holidays!
Posted by Phineas Gage at 7:39 AM 1 comment:

For more information on these magnificent animals, contact Rob @ 802-279.3364 (Yakberry mobile) or via e-mail @ rob@vermontyak.com.

Thanks to Zachary "Mountain Man" Faulkner for this delicious and manly yak recipe.

So, this is what a manly dinner looks like before I ingest it.

A pound of turkey bacon, cooking next to a pound of delicious yak.

I don't recommend eating all of it in one sitting, the yak lasted two meals and the bacon made appearances for four meals. 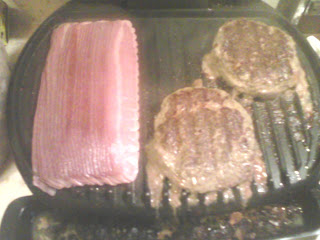 Now, my cooking style is on the fly and with little to no measuring of any kind - I like to see what happens with a pinch here, a dab that, a top coming off...well, that's just too much.

Anyways, in the yak I added (to taste, after some "testing"): Garlic Salt, Onion Powder, Cayenne Pepper (me likes a little heaaat), and two eggs.

After it was all mixed together, I patted own the outside of each burger (on both sides) with an even ratio mix of ground pepper and salt (again, to taste).

Cook to you own liking, apply carb exterior with bacon, and I enjoyed garnishing it with some Sweet Baby Ray's BBQ Sauce - pro tip: add in some honey for some custom honey bbq action.

That about sums up my cooking adventure.

As always, a nice cold one goes well with red meat, and a manly pose while eating is quasi optional, meaning you should at least strike a pose initially for the first bite, or raise an arm in triumphant delight on the last bite.

Bon Appétit!
Posted by Phineas Gage at 8:46 AM No comments: